Situated on the edge of Chat Moss, in an area once full of collieries, lies the picturesque village of Astley Green. In the heart of the village stands Astley Green Colliery Museum which, but for the foresight of Lancashire County Council and several leading figures within the community, would have suffered the same fate as the other collieries in the area, total demolition. It was the uniqueness of the 3,300 hp twin tandem compound steam winding engine that brought the demolition to a halt. As the result of the intervention, the museum houses Lancashire’s only surviving headgear and engine house, both of which now have scheduled monument and listed building status.

The museum occupies some fifteen acres of the Astley Green Colliery site. To the south lies the Bridgewater Canal and Astley Moss, an important mossland site. The low-lying landscape ensures that the museum’s 98ft high lattice steel headgear can be seen for many miles, a fitting memorial to days now past.

Apart from the steam winding engine and headgear the museum houses many exhibits, not least of which is the collection of 28 colliery locomotives, the largest collection of its type in the United Kingdom.

The colliery began its life in 1908 to exploit coal reserves in the south Lancashire Coalfield. Had it not been for the increasing demand for coal, at that time, the project would not have been viable. The coal seams at Astley Green are very deep and overlain by 100 feet of wet and unstable ground. These factors made the sinking of the shaft a very expensive proposition. The novelty of many of the requirements tested the ingenuity of the engineers during the construction, so much so that a paper, on the sinking of the shaft, was presented to the Institute of Mining Engineers. The colliery had a lifespan of only 62 years, finally closing its gates in 1970. Because of its short and relatively recent history, a considerable number of written and photographic records have survived. This has enabled a detailed study to be made of the construction of the colliery and its subsequent operation.

The museum is now run and maintained, on behalf of the community, by the Red Rose Steam Society Limited, a registered charity based in Lancashire. 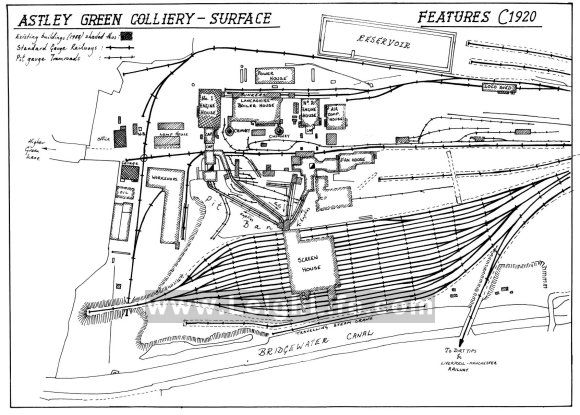