Howe Bridge Mines Rescue Station was the first mines rescue station on the Lancashire Coalfield opened in 1908 in Howe Bridge, Atherton, then in the historic county of Lancashire, England. 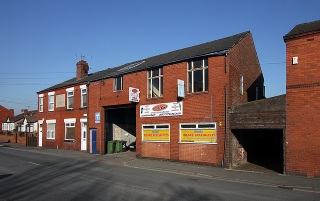 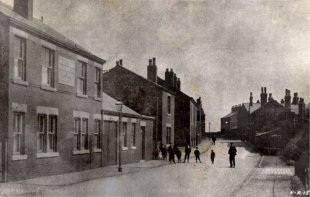 Before Britain’s first mines rescue station opened at Tankersley in Yorkshire in 1902, pit managers and volunteers were usually the first untrained mines rescuers. They fought fires, rescued victims and recovered bodies in the collieries in which they worked. Rescue stations were recommended in a Royal Commission in 1886 but were not compulsory until after the 1911 Coal Mines Act was passed.

In 1906 the Lancashire & Cheshire Coal Owners Association, made up of 27 different colliery Companies, held a Special General Meeting in Manchester mainly to discuss the formation of their own Rescue Service to cover the local group of collieries. Not everyone was fully committed to the idea and disassociated with the project but the motion was carried. Later, other owners, not already members of the Association agreed to join the scheme.

One of the main supporters of the concept was the Fletcher Burrows Group of Atherton, who suggested the Lovers Lane site for the new station and undertook to supervise the construction work. Mr Charles Pilkington, a leading mine owner and glass manufacturer from St Helens, performed the opening ceremony on Thursday 2nd April, 1908.

In the late 19th century there were a total of 7 coal mines within close proximity to Atherton, several of which were owned and operated by Fletcher-Burrows: Lovers Lane Colliery, Howe Bridge Colliery, Gibfield Colliery and Chanters Colliery. The family dominated both industrial and civic life in Atherton during this time bringing experience dating back to the late 1700s. The company Fletcher- Burrows and Co was formed in 1892 and survived until the formation of Manchester Collieries in 1929 and was a great benefactor to the local community.

In the following months, training galleries within the Station were constructed to represent lengths of mine roadway and a short section of coalface. There were low and constricted parts that could only be negotiated by crawling. Heavy obstacles were placed in the roadways and steel tubs and flat bottomed carts were included for the transportation of material along metal rails. There were also a number of 56lb weights to be carried around and a dummy body weighing 150 lbs on a carrying stretcher. There were wooden props of varying lengths; filled sandbags for the erection of roadway seals and a large dump of pit rubble and small rocks so that the rescue men could use picks and shovels to represent the clearance of a roof fall. All these tasks were carried out wearing the apparatus for the full 2-hour duration whilst the training galleries were filled with thick smoke and fumes.

The rectangular plaque between the two houses once read

The right hand section of the building was originally single storeyed and had a large training hall at the rear. Rescue teams from the mines were trained here using training galleries around the outside wall of the hall.

The Station also included offices and storage rooms, an apparatus re-charging and re-servicing room and a garage for the two emergency rescue vans. Each rescue van contained a full compliment of equipment that would be required in the early stages of an underground emergency incident. There were also changing and bathing facilities and domestic accommodation for the Superintendent and his family.

The first rescuers were provided with Siebe Gorman Proto breathing apparatus which was selected by competition. A team from the rescue station was tasked with training rescue teams from each colliery, and provided emergency assistance to collieries throughout the Lancashire Coalfield. 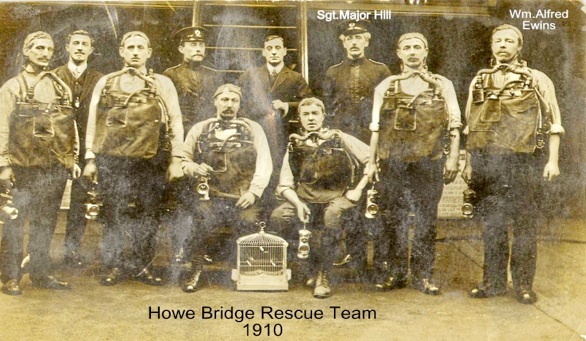 Teams from the rescue station attended disasters at the Maypole Colliery in Abram in 1908 and the Pretoria Pit Disaster in 1910.

The station closed in 1934 when Boothstown Mines Rescue Station, the central rescue station for the coalfield, became operative.

The Mines Rescue Station was built in 1932 to 1933 and was designed by Bradshawe, Gass and Hope of Bolton for the Lancashire and Cheshire Coal owners. The building was opened on November 18th 1933. The building consists of a two storey section fronting on to Ellenbrook Road reducing to single storey at the rear. The front section contained a vehicle garage, kitchen, shower rooms, laboratory, oxygen and equipment storage areas on the ground floor and offices, board room together with an aviary (in which canaries were bred) on the first floor. The single storey rear section contained training galleries with observation halls. Minor additions to the rear of the building were made at a later stage primarily for vehicle garaging.

There were two u-shaped training galleries immediately behind the garage. Each gallery had its own observation hall, and was laid out to represent underground workings of a colliery. Emergency doors were fitted with inside panic bolts to allow ready egress to fresh air in case of need. The upper portion of each door was finished with a glazed inspection window so that the work being carried out by the men in the galleries could be observed from the hall. Each gallery and observation hall formed one unit, but they were so planned that they could be used separately as well as together according to the practice.

The station was built with a resident superintendent’s house, two semi-detached houses for instructors, and six pairs of semi-detached houses to accommodate the two permanent rescue corps of twelve men maintained at the station. The site also included underground air raid shelters, a tennis court, an allotment garden section, a strip of land for parking of vehicles, a children’s play ground and an area of open space for recreation. The site finally closed in 1994.