The use of Pit Checks is believed to have commenced in Britain c.1860/70 and continued into the 1980/90s when they were eventually replaced by the introduction of electronic swipe cards.

Pit checks are one of the most commonly encountered forms of mining memorabilia. The total number of different examples ranges well into the thousands. Although most of them are less than 100 years old their are still several types for which the original purpose or method of use remains unknown. This makes their study all the more interesting.

Pit checks were produced in a variety of different materials and designs. However, in common most normally bear hand stamped identification numbers in the centre of their obverse fields. They were typically manufactured in either brass, zinc or aluminium although plastic/bakelite and leather examples are also known. The majority of pit checks have embossed or incised uniface designs and are encountered in several different shapes including circular, square, rectangular, hexagonal or octagonal.

It is probable that the use of lamp/time checks pre dates 1882 by at least a decade or two. Certainly by the early 1900s they were in common use in most coalfields.Such tokens not only acted to indicate which lamp was commonly used by which miner but more importantly acted as a means of recording the number of men working under ground on any particular shift. This was essential information not only to colliery management, who used the tokens as a form of work attendance tally, but more importantly as an indicator to rescue teams of the potential number of miners involved in the event of an explosion or other type of pit disaster.

By 1913 the use of checking systems in British mines had been made mandatory by a supplementary amendment to the Coal Mines Act of 1911.

Most of the early checking systems employed only one token (usually of brass) per collier. This token was often referred to as a lamp check/token and was often taken home with each collier at the end of each working day. Such lamp tokens were handed in to the lamp room attendant at the start of each shift in exchange for a safety lamp bearing the same identification number as that on the collier’s personal check. At the end of his shift the collier would retrieve his check from a tally board in the lamp room or alternatively directly from the lamp room attendant in exchange for the safe return of his lamp.

Later most systems each collier usually collected three personally numbered checks of different shapes or metals from the time office or lamp room on arriving at work. Subsequently each miner handed in one check to the lamp room , one to the banksman on entering the cage before descending the pit and one was retained by the collier. The banksman then returned each shift’s checks to a board in the lamp room or time office. Each collier retained his personal check on his person until returning to bank at the end of his shift where he handed it back in to the lamp room or time office, often via the banksman.

The museum recently acquired a hoard of miners checks from the old Parsonage Colliery in Leigh. These had been saved by a Parsonage colliery worker who saved them, just as they were going to be thrown away. Since that time they have been languishing in his shed. Joining as a new member of the museum, he has kindly donated them to us. We will select a few examples to make a display for the museum and decide what to do with the rest, to ensure the museum benefits from this wonderful donation. A number of local miners from the colliery and their children have been in contact with the site to see if we have their tag number, but so far we have been un-successful, with the requests we have had.  The doner  said he still had a number more which he will donate to the museum ” so all is not lost yet. It would be nice to reunite some old miners to their colliery checks. 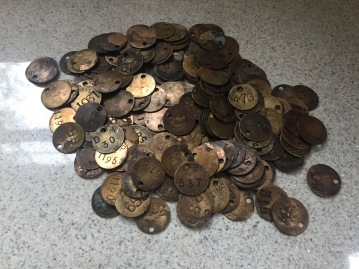