When Lancashire miner Jack Jarvis caught the 2lb roach — a respectable size for that type of fish—more than a century ago, he decided to get it stuffed and embark on a tour of Bolton’s pubs with the specimen. His aim was to raise money for the surviving families of those killed in the Pretoria Pit disaster of December 21, 1910.

The explosion, in the Westhoughton mine, which claimed the lives of 344 men and boys, was Britain’s third worst mining disaster. In 2012 the strange artefact, which is mounted on a plaque in a glass frame, turned up at a Cheshire antiques shop.

The antique was thought to have been found wrapped up in the home of an elderly lady in Preston after she died. The owner of the antique shop stated “A local woman who did not want it brought it in. I gave the family £200 because it has got to be worth that. How it got from Preston to Northwich I do not know. 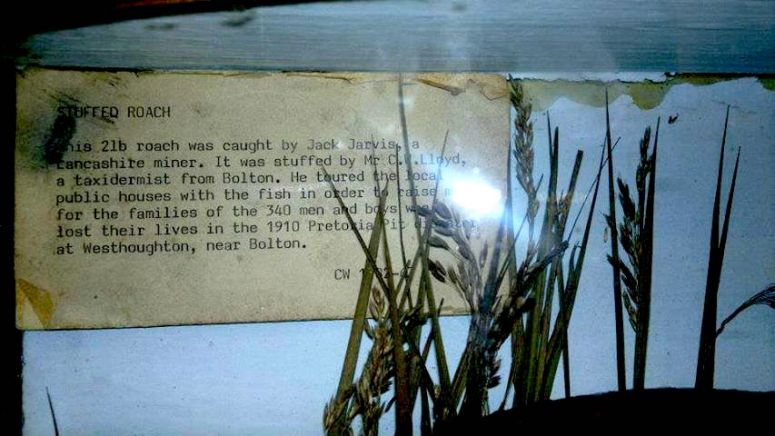 Details about the fundraising is attached inside the frame and a news story detailing the Pretoria Pit survivors’ names is also included.

The item as subsequently sold by the antique shop and Mr Jarvis’s great, great grand-daughter Betty Flitcroft contacted the museum to see if we had it on display. She explained, “We went to see it, and took some photos but the owner didn’t know what he wanted for it so I left my address.  A few months later some chap rang me to say he had bought it and the man in the shop had given him my address, but he didn’t want to sell it as he was putting it in a museum”  She also stated, “Jack’s father had lost a leg in a mining accident at Spindle Point Colliery so he must have felt the need to try and help out somehow. All my gran could remember was how mad her mum was, that he had spent a full week’s wages on having a fish stuffed and mounted and she had 7 children to feed!

If anyone knows what happened to the Pretoria Pit Fish we would love to know and if possible, display it at the mining museum in the future. Please share this page as far and wide as possible to try and locate the missing Pretoria Pit Fish and hopefully get it on display to the wider public.